Powered by One 18650 Rechargeable Battery

18650 batteries have longer cycle life and can be recharged by NITECORE UM10/20 using a solar panel.

Allows the user to know battery power status when on the move.

After battery installation, the red LED will flash to indicate battery voltage accurate to 0.1V.

With the EC21 switched off, press and hold the on/off switch for over one second to enter ultralow output (one lumen)

With the EC21 switched off, press and hold the mode switch for over one second to enter turbo output (460 lumens)

With the light turned on, press and hold both switches for over one second to enter lockout mode, thus preventing accidental activation of the EC21.

Simply loosen the tailcap to cut off power entirely. This mode is recommended when the EC21 is left unused and stored for an extended period of time.

For All Weather Conditions 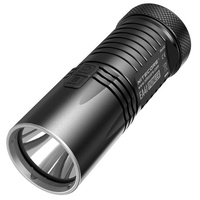